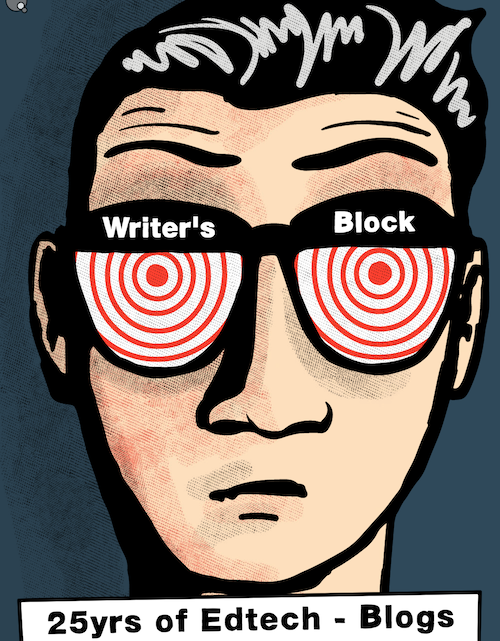 This week I was able to catch up a bit on some podcasts I subscribe to. One of the casts I’ve been enjoying lately is 25 Years of Ed Tech, a serialized version of Martin Weller’s book by the same title. Now audio books are plenty good by themselves, but this particular podcast has an addition episode per chapter called “between the chapters” where a host interviews members of the ed tech community (those around Martin in some way) about the topic of the previous chapter. This week was all about blogs.

In this week’s between the chapters, Laura interviews Bonnie and Clint. There’s lots of comment on here but what prompted me to sit down and write a bit was a comment that Bonnie made in refletion on having blogs as an assignment for education students she was teaching. Listen to the whole podcast below, but I’ll paraphrase her comment:

Including blogging assignments simply to a course largely failed in years more recent than the decade the chapter was written about. Students couldn’t really get into the assignments for all sorts of reasons, and now that has been replaced by a community developed resource where students have more agency in how they contribute and whether that contribution is attached to their name.

My first encounter with writing a blog was also when I was an undergrad education student. In my program I enrolled in maybe 4 ed tech classes and many of them had a blogging component. I set up a blogger site and posted only as much as was required and only using the prompts requested. Just like Bonnie mentioned, I was a student that would have asked “does this post have to be 300 words”? I had some understanding that blogging was important, but it didn’t really click. I didn’t see it’s power or utility clearly. One ed tech class I took following my internship and I really struggled with posting. Actually at that time I really struggled, like many post-internship students, with staying motivated in my program after having been in charge of my own classroom (at least to some degree). Not only that, but I think a lot of post-internship teacher candidates suffer from burnout, which I didn’t recognize at the time, but that’s a story for another time.

This class I struggled with writing for prompted me to go visit the prof, who eventually became a mentor and friend, and they dug out a FlipCam (remember those?) and said if I was having trouble writing, maybe a vlog would be better. I made it through the course but never formed the blogging habit. Given this experience I have no idea as to why when I was an IP teacher than I included blogging as an assignment and activity for students, but I did, and I freely admit it was equally a failure.

When I started grad school I again had some classes that included blogging, but this time as an option to deviate from more traditional papers. This helped some, plus I was introduced to more prominent bloggers in the ed tech community. It was actually during this period that I found the edtechie blog (Martin Weller) and the cogdogblog (Alan Levine). I started to see a community of bloggers and see the connections between them. In 2012 I went to Helsinki Summer School, a one month program with about 25 courses available. I enrolled in Designing Teacher Education for the Future, of course because especially in 2012, the Finnish education system was all the rage. I had been to Helsinki the year before, and loved Finland, so of course I jumped at this opportunity. The organizers of the program had a volunteer program and one of the things they were looking for were bloggers. I volunteered for this, received some really nice postcards and stickers and a CD I still listen to for the effort, set up a blog on blogger specifically for it, and off I went. I wrote almost everyday I was there. At the same time I started up a second blog called 21 days of ice cream, because Finnish ice cream is freaking amazing and that turned out to be a vlog. The latter is now completely shut down, but the former has been migrated to this blog.

I was pretty proud of this blog, and was stunned when the organizers of HSS one day said that they were really enjoying my blog. Like, wait what? People were reading it? After returning to Canada I tried to keep up with blogging but it slowly fell by the wayside. I would have fits and bursts of writing, particularly if I was in a MOOC or at a conference or something. It was just such a difficult habit to form. Move onto 2015/16 and I moved away from Blogger and began to take my online presence a bit more seriously. I signed up with Reclaim Hosting and started working on my web presence, but still lacked blogging. Fast forward again and eventually Terry Greene ran this event for eCampus Ontario 9x9x25. All he was asking for was 9 posts, over 9 weeks, and each being at least 25 sentences.

I’m not sure I made it that far. In fact, I really struggled at first with that. At some point something clicked though. I think I stole a bit of the approach I saw Stephen Downes using to be honest. If you haven’t seen it, he posts one paragraph thought snapshots on articles and web resources he reads over at downes.ca. So, I added a bunch of the 9x9x25 blogs to my RSS reader, and when I saw one that sparked a thought I spun up a post here under the Quick Reflections and WebMentions category. This completely removed that writer’s block for me of “what do I write about!? AHHHHHHH”. To this day that category might actually be the most active one on this blog. Since 9x9x25 I’ve been much more consistent writing here, but if it wasn’t for that break through for me to see a blog differently than I’d been introduced to in 2007 I wouldn’t be writing here today.

X-Ray Specs by @visualthinkery is licenced under CC-BY-SA.
CategoryQuick Reflections and WebMentions