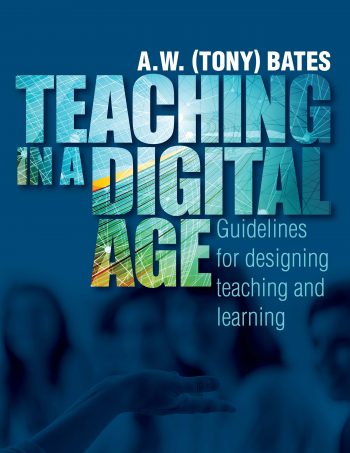 Advice requested on ‘Teaching in a Digital Age’

Wow, it’s already been almost 4 years since Teaching in a Digital Age was openly published by none other than Tony Bates. I recall being a younger, bright eyed, instructional designer trying to shake stuff up when this book was published and was about to embark on an open textbook authoring project of my own. Four years doesn’t seem that long in the grand scheme of things, and yet it feels like ages ago at the same time.

Well, given that it’s been four years, Bates’ is looking at the book again and asking for advice from the community on what to do about the book. He presents four options:

I personally don’t think that there is anything wrong with the first option. If the resource is valuable to a community of instructors and learners then the community can help to keep the book alive. Afterall, if you’re using it in your class you’re likely adding to it either in class discussions, lectures, or for the more ambitious and technical, remastered your own version of it independent of the BC Campus repository (i.e. you’ve done option 2). That’s where some of this OER stuff gets murky. Maybe someone has updated all of the URLs that have rotted over time, but how would Tony know that work has been done without the person informing him? How does that get updated in the repo? Should it even be uploaded back into the repo. There’s just so many different pathways that OER can take once it is released into the wild. And after considering my own writing, and Stephen Downes’ blog post on this matter, I couldn’t blame Tony for just letting this version of the book rest.

Option 3 is interesting to me. There are a number of new technologies (I use that term a little loosely here to acknowledge they all have a long and likely forgotten history) that were not discussed in the book as published in 2015. Tony makes a good point about the resource already being 500 pages and who would read that as is. My bet is that it is consumed in pieces and any number of permutations. That’s one thing that has continued to confuse me about web based books. The really great thing is that the book is gathered around topics, has a similar format, and a consistent voice. But so does a blogfeed sorted by category. I’ll admit the presentation of a Pressbook is enticing, but I don’t think it’s necessarily any better than a blog post series in terms of the value it presents to the readers. Perhaps rather than just adding to this specific book (URL) a second volume could be written that addresses just the new topics.

Personally, option 4 I think would be the most interesting. Looking at the first edition of the book, you’ll see that activity 1.8 poses questions to the reader, and in the final appendix of the book there are responses to the questions from the author. As in, Tony doesn’t give the reader definitive answers to those questions, but instead offers his insights, which given his wealth of expertise is so valuable to the reader. For me, reading blogs of experts in this field has been so encouraging. Their willingness to share their thoughts openly has helped me and many others grow as educators, IDs, edtechs etc. Occasionally, one specific blog posts I’ll see several authors of different blogs I follow discussing a post in the comments section. I find these even more interesting as it shows on one webpage how several experts I look up to think about and discuss topics and ideas with one another. It reminds me a bit of a book preview I received in grad school which included the comments on chapters between the three book authors. This pre-publication version of the book was shared with us ID students because our instructor wanted to expose us to how long time IDs conversed about ideas and topics. So, with that in mind, an option four where say David Cormier (as Tony suggested) wrote about a topic, and some of the other book authors commented on the ideas presented, culminating in a publication that is a series of conversations would be really interesting to me. That’s what I think would be really interesting.

Regardless of which decision Tony makes, I’m sure it will be the right one. The open license provided on the original book already allows many possibilities for the resource, option 4 is just one more option.

Teaching in a Digital Age (cover) by Anthony William (Tony) Bates is licensed under a Creative Commons Attribution-NonCommercial 4.0 International License, except where otherwise noted.