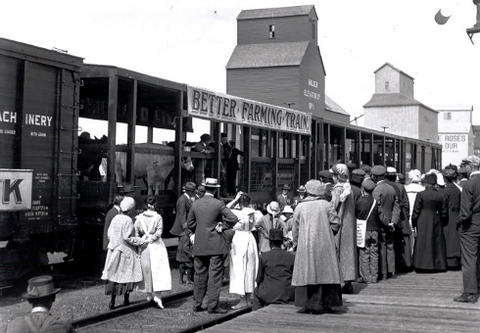 In case my comment on Tony’s blog gets eaten I thought I would repost here what I left as a comment there. While the original post provides some interesting examples of distance education delivery they are mostly examples from our southern neighbours. For a Canadian example we can look to the University of Saskatchewans Better Farming Train, a program administered by the Department of Agricultural Extension:

From 1914 to 1922 a Better Farming Train (BFT) toured the province providing lectures and demonstrations and presenting exhibits on matters pertaining to agriculture…The use of trains to deliver extension programs was not new in 1914. A decade earlier special excursion trains brought rural residents to the Dominion Experimental Farm at Indian Head from as far away as Prince Albert. With the establishment and growth of the University farm, it too began hosting excursions and tours. The BFT simply reversed the process…The train was divided into five sections: Livestock, Field Husbandry, Boys’ and Girls, Household Science, Poultry, and Farm Mechanics…In 1914 over 40,000 people attended over a five week period. By 1922 over a quarter of the province’s population had visited the BFT.