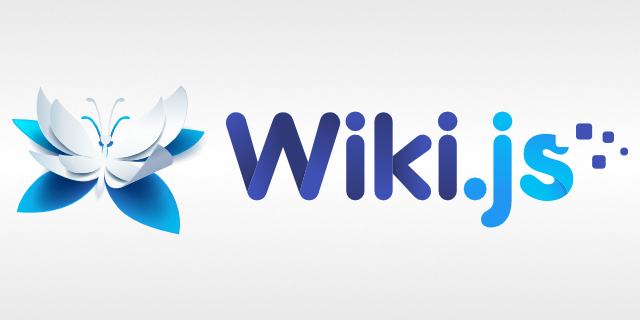 Breath of Fresh Air – Wiki JS in the Clouds

Been on the hunt for good open source wiki software for a long time. Wiki.js seems to be exactly that, slick and polished. https://t.co/934Xozi7fX So of course I built an installer for Reclaim Cloud https://t.co/VR6enLlStt

This was not on my original list of things to check out in Reclaim Cloud, but I can’t help but accept the invitation to give it a try. It has been at least a year since I’ve really looked at a Wiki tool. When I was in grad school Wikis still seemed very popular as a tool for student collaborative projects, writing, etc. Back then Wikispaces dominated the market in terms of what everyone seemed to be recommending. I used a few Wikispaces back then for different projects, either for a class or for the ETAD Summer Institute. Like most things free, Wikispaces shut down and I saw a panic on Twitter with what to do.

This wasn’t the first Wiki platform I saw that had troubles causing a panic. In a previous role of mine another education specialist working in a slightly different area than me had used a similar service to build up content and curriculum over a period of years. It was a pretty rich resource and contained pages and comments for all sorts of projects they worked on. Suddenly one morning they stopped by my office in a panic, the platform went 404 without warning. Not only that, but they didn’t have a record of any of the materials, everything was stored in the wiki. Thankfully it came back online about two days later, the provider/host had some issue but everything came back 100%. However, with that kind of scare there was quite a bit of pressure to bring some of the critical content into a self-hosted environment and I ended up helping them transition that material into the LMS (the best option at the time).

I didn’t touch Wiki for awhile after that until Mike Caulfield hosted The Happening II. That was like 2015 and on the Smallest Federated Wiki. His work on that was probably the most exciting use of Wiki I’ve ever seen at the institutional/class level. The writing assignment he included was superb, and the functionality of FedWiki enables some really powerful thinking and writing abilities. More on that later (because Reclaim Cloud also has a one click install for the Smallest FedWiki).

My next big Wiki experiment was for a class where we ended up adopting the philosophy behind Mike’s The Happening writing assignment but changed it to fit with a regular Wiki. For that project we used Confluence Wiki. It took some tweaking but I think it’s working alright now. The first time around was challenging for students because of the way that Confluence obscures where you will be adding pages, and navigation of the Wiki in general. I tried to like it but just can’t get fully behind that platform.

I have to say, the UI for Wiki JS just blows everything else out of the water. It’s a clean modern look that doesn’t really feel like a Wiki, but still has that column layout of “folders”, navigation, and content (see above). I discovered as I was building a few pages that there are a lot of features (many that I assumed would be there in the first place) still to come, but I think WikiJS is already in a solid place to do some work with. When you create a new page you have options of how what kind of editor you use: 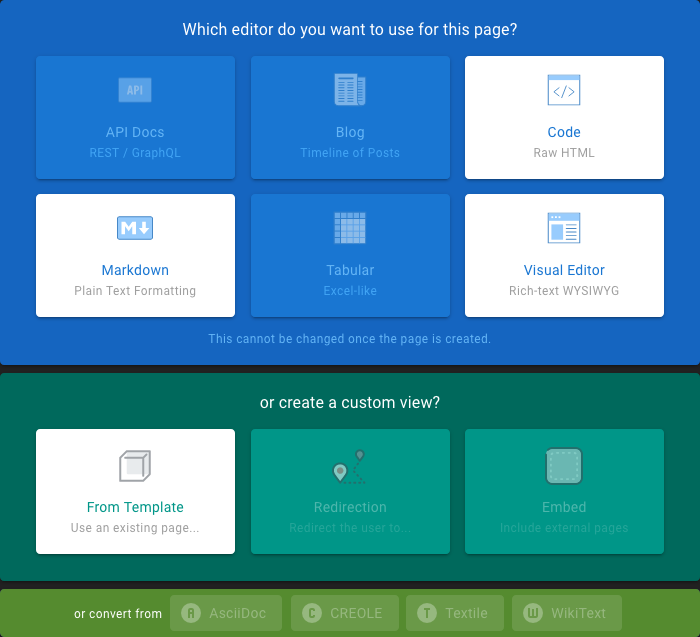 Today I tried out the visual editor and the code editor. The visual editor gives you the basics of what you need: headings, paragraph, lists, insert tables/images/videos. One thing I found lacking was a way to toggle into an HTML editor from there (WP broke me I know). I was hoping to insert an image from the Picture Ipsum site as I’ve been using that lately to create dummy sites, but I could not find a way in the visual editor to add an image via URL (coming soon). 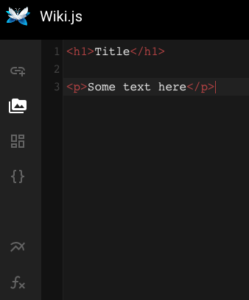 The code editor really impressed me. I’ve been using Sublime, Fiddle.js, and Visual Code Studio to make websites in the certificate program I am currently taking from OCADu and that has given me certain expectations for the look and feel of a code editor. WikiJS did not disappoint. You get a whole screen view of the editor, and it lays everything out by line with the colour coding I’ve become accustomed to in the editor. Comparing this to WP’s Classic Editor Text view, or any LMS’s HTML editor and hands down I would pick this one every time. If you have broken tags it even seems to alert you to that, thankfully for me. What I also found was that if I copied rich text – for example, the attritbution statement from Unsplash – and pasted it into this editor that it converted to HTML right away for me. I think that is a great touch that I haven’t seen in many other editors, and I think instructors and students would be happy to find that out.

The last brain bender I found was the page structure. When you create a new page it created a path, and I found myself staring at the “Table of Contents” trying to figure out how to nest pages under one another. I found in the Wiki JS docs that they don’t use the same folder structure as a typical Wiki: 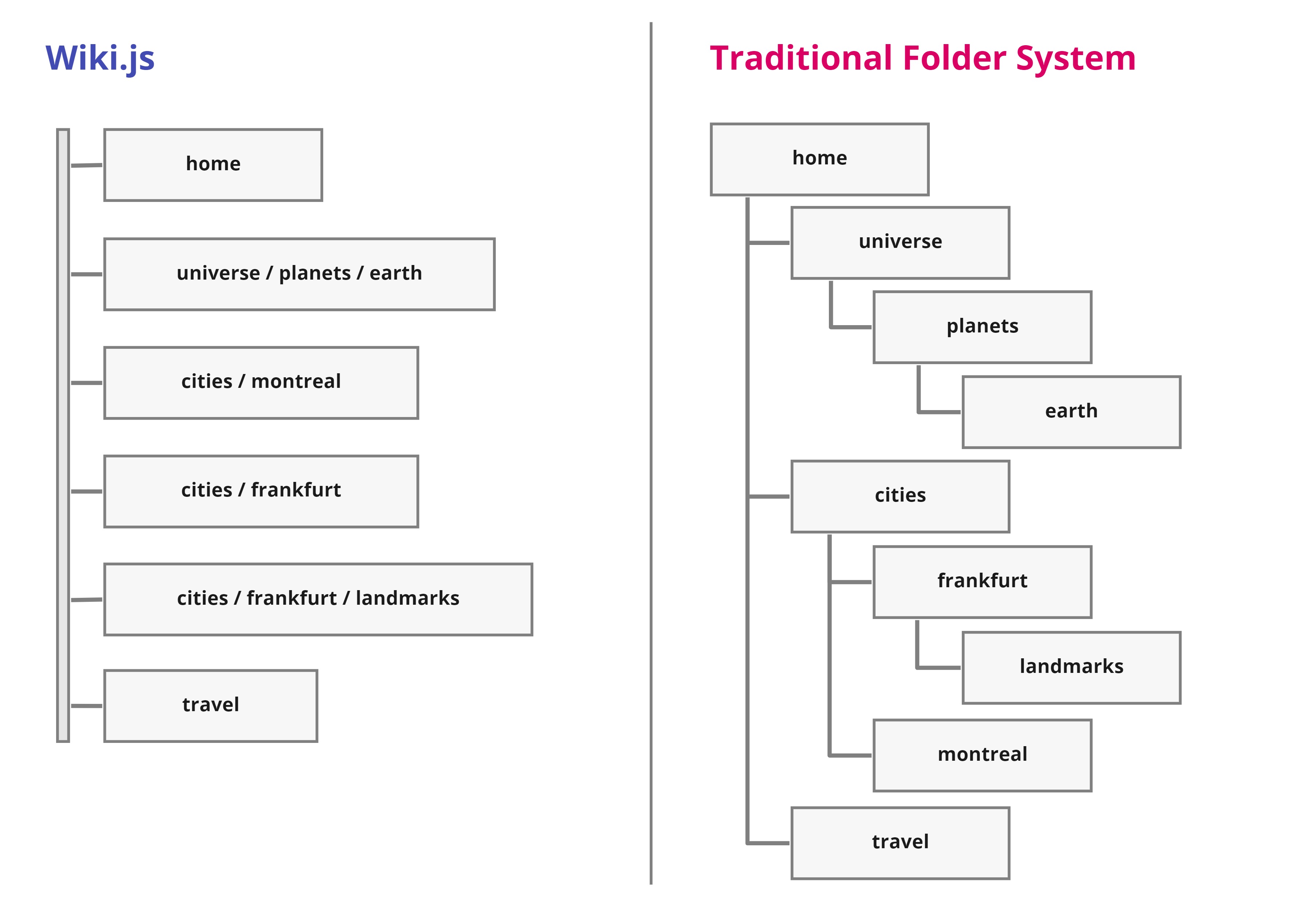 Once I learned that, and looked at the docs pages I noticed that the table of contents was actually for the PAGE itself, not for the SITE. It turns out that it creates a page ToC automatically when you use headings properly. 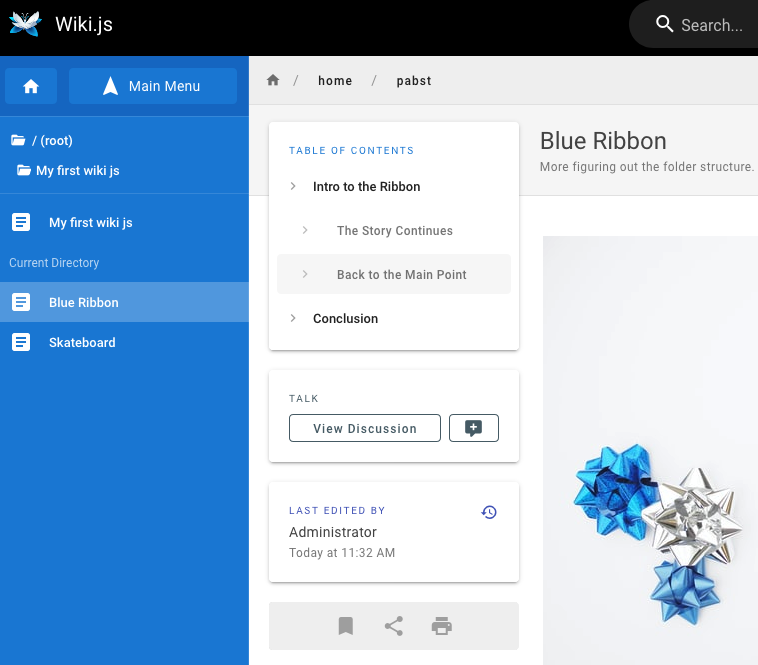 That’s my first run at it. Overall I see a nice entry level for WikiJS, and based on the “coming soon” items I saw, I think it has a very high ceiling. Enough to get me thinking about Wiki again and actually a bit excited about it.