Wiki as a tool for exploration and thinking

November 23, 2018 0 By JR
A wiki is a tool for the capture, extension, and dissemination of community knowledge.- Mike Caulfield

Wiki is one of those things that has been in and out of popularity it seems since my teacher training. I can remember the first class I had where we discussed and used a wiki. Then again in grad school we set up and used a number of different wikis (no I can’t show them off anymore, thanks Wikispaces). Another ed developer used either wet paint or PB wiki to organize and deliver faculty training, but after which ever site had some server issues which took the resources offline for about a week, we were strongly urged by our direct reports to move the content into the learning management system.

Overall, I think the introduction to Wiki generally goes a little something like this:

but that is about where it stops. Use a wiki to make class documents, something that GDocs eventually took over as wiki fell by the way side. Then I started hearing about Chem Wiki and other student wiki projects through a number of institutions including those in BC and even right here at USASK. I also had a chance to try editing Wikipedia myself during a session at OER18.

Nearly all of the approaches I encountered had one thing in common, that wiki was about assembling knowledge and that the tool ultimately operated as a consensus engine. You could have behind the scene discussions and debates, but ultimately the ‘pages’ of the wiki were a consensus.

At the top of this post I have a quote from Mike Caulfield, whose work I’ve followed since grad school. Around 2014 he wrote extensively about Federated Wikis (FedWiki) and a WordPress version he called “Wikity” – the code for the WP wikity theme is still available. I read all of the posts Mike had written back then, but it wasn’t until he offered The Happening II: Teaching Machines that I started to get a feel for what he was talking about. That learning experience was offered using a federated wiki, and something I’d never seen before, parallel hypertext. Screen Capture from Using Federated Wiki in the Classroom: Getting Started by Mike Caulfield.

The way the parallel hypertext worked was that everytime you clicked a link in the course a new column would appear. The key advantage of this being that articles were short and snappy, but that you could see the linking of ideas. How many times have you opened a new tab and by the time you’re working with ideas, flipping back and forth between tabs is a major roadblock? The federated and wiki portion of this set-up meant that when I made an edit to a “card” (article/column) a copy was first automatically saved to my account and then changes were made on my own copy. So if you searched for a card by title, you’d get my card as well as whoever else wrote about that topic. You can see all of the different versions participants came up with, and because of the parallel hypertext you could “lay them all out” in a row. It took a couple of weeks for me to really get it, and then I’m afraid I dropped out, but it was still a powerful learning experience for me.

Later, when Mike wrote about Wikity I was curious how that would work. After all, I don’t have the tech skills needed to set up my own json and node.js … stuff? So a WordPress driven thing looked more interesting and within my ability. You get a similar sort of set up using WP: 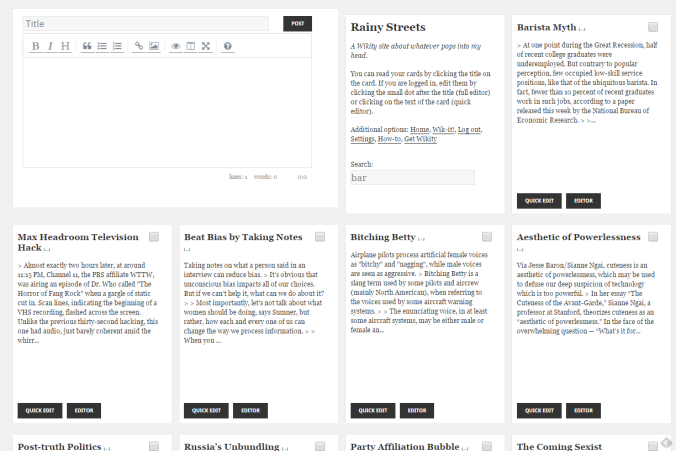 The driver behind the way he uses wiki is that it’s about working with ideas, recognizing patterns, seeing different takes on the same topics etc. You can really see how this thinking influenced his current work with the DigiPo project and Web Literacy in my view. When Mike asks his students to write this way he uses four stages as I recall. And just like how rules influence how games are played, so too does the technology affect how the tasks can be tackled. With that in mind, I’d like to just briefly talk about how Mike’s ideas have influenced current work on a course using a wiki.

The teacher education course is set up into 12 weeks, each having a specific theme. The weeks are actually grouped into four themes:

The instructor had planned out a version of the course, with lots of really rich activities and opportunities for students to add things to their professional portfolios. They had a wiki assignment noted, but no instructions. We talked about what brought them to wiki in the first place, the themes of the course, and how we could provide a framework for students to work through ideas they might not have encountered before. It was through this conversation I saw an opportunity to use what I learned from Mike’s work with wiki. So while we aren’t using the FedWiki or Wikity set-ups we were still able to layout a framework for students to explore and write about topics and concepts in the course through three stages:

The first two weeks, students will encounter a range of topics and be provided some resources, and will be asked to create stubs for 4 different topics. Just a few sentences. If a stub already exists they can add to that stub, or create their own (keeping in mind that seeing two approaches to related concepts will be interesting). The following weeks students will be asked to take a bit of a deeper dive on an idea. What I saw as effective in Mike’s framing of the Idea Mining exercise was to explicitly tell students this is not about summarizing articles, but finding interesting ideas in the text. Finally students generate a longer article based on connecting ideas from the Idea Mining exercise.

I’m excited to see how this works in a non-federated/wikity format. I think one of the daunting things about wiki writing in general is that we are trained from a young age that we should always be writing in a paper format in school (like the keyhole style), so it can be difficult to feel finished or to get ideas onto the chalkboard. The scaffolding and structure of this assignment I think will support students in both their writing, but also in making their thinking and learning visible.

Feature image by Kimbar was published in Wikimedia Commons under a CC BY-SA 3.0 Unported License.