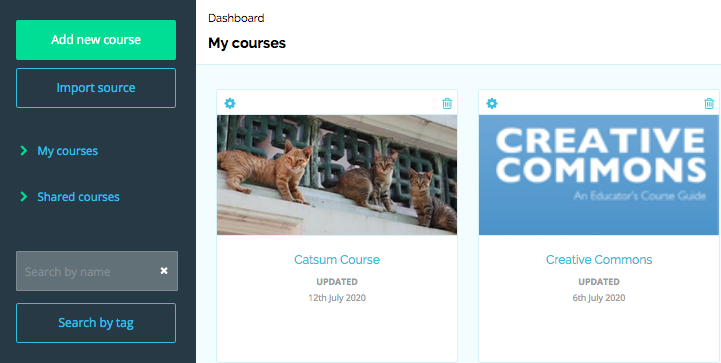 Don’t worry, I’ll keep naming everything to do with my exploration of the Adapt Authoring Tool as “adapting” something. If you have puns to suggest I’m all ears.

Over the past few years I’ve loaded course materials into a number of different systems, mostly LMSs. The first LMS I ever used was Blackboard “classic experience” which a lot of people say looks like it’s straight out of the 90s, but I think those folks have forgotten what a 90s geocities site or bulletin board looked like. It’s certainly not modern, I’ll agree there. I think the next system I had a chance to experience was Canvas LMS actually, but as a learner on the Canvas Network (yay MOOC era), and Canvas LMS is now the platform my workplace has adopted to replace BBL. I used Moodle for a few years while I was in Alberta, and while I was excited about a change from BBL, which seemed restrictive at the time, I also found Moodle to be restrictive. I know there are lots of plug-ins etc for an open platform like Moodle, but if you’re not running the system you only get the tools that you are provided. I’ve taken a few courses on D2L as well, and have tried it out to see what kinds of things it might have to offer. All of these platforms perform very similar tasks pretty well to the same, but differently. I’ve also given platforms like Thinkific, WordPress, Udemy, RISE 360, and others a try as well to see what I could do with them.

I had actually tried adapt a little over a year ago, but with a company I heard about on the Dear Instructional Designer podcast, Evolve. Now, I’m trying it again on my own on Reclaim Cloud. When trying to use a new authoring tool I sometimes use course materials I have laying around, or a module template that I’ve used for years. Lately, when it comes to the course materials I have actually been using the Creative Commons for Educators materials. It has a structure in place and enough content to quickly throw up a course that is CC licensed but also looks and feels like a “real course”. Do you ever see ed tech demos where it’s just nothingness? Sometimes that makes it hard to imaging what a course or learning materials might look like (don’t worry, I’ll show in a minute that I’m now going to be guilty of not having a “real” course to show you). Anyway, I’ve used those CC materials in all kinds of platforms, including the LMSs I mentioned, plus Pressbooks and more. It’s been pretty handy. So I thought I would try that again with Adapt and wow was I in for a rude awakening.

If you’ve never used Adapt before here’s a peek at the page level. You can see that a page is comprised of Articles, Blocks, and Components. This would be pretty close to how RISE360 is framed with its “lesson” and “block” set up. Adapt gives you different types of components you can use, and many of these are really similar at a glance to what a “block” performs in RISE360. But it’s not that simple because every time you go to edit one of the ABC elements in Adapt you get a slough of options. For example, each ABC element allows you to enter a title, body, and instruction text. You don’t have to display the title, I think those are used for file management mostly. But trying to figure out how to arrange content, especially text, in this environment became tricky. I had really fallen into a trap of leaning back on course designs that had a strong history rooted in correspondence courses rather than thinking about more web-based/elearning course design. And did it ever show as I tried to port the CC course materials into Adapt. The pages turned chaotic pretty quickly. 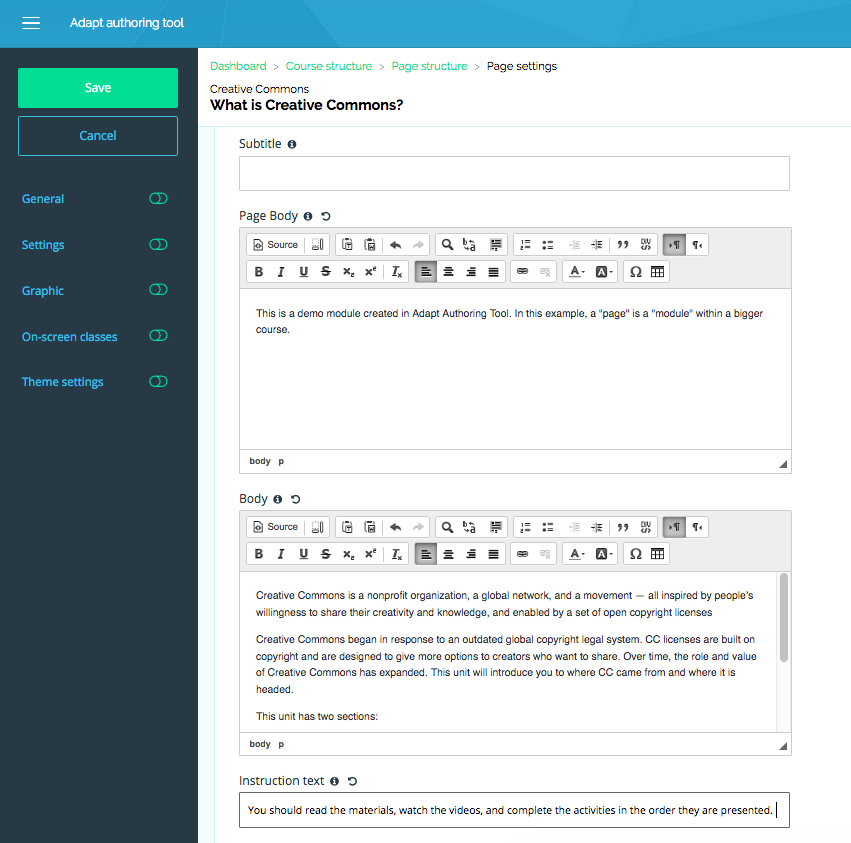 What is interesting about the authoring interface though is that for every element you get the body section with a source and block viewer which is great., but you’ll notice there’s no “insert picture” or other media in the RCE. That’s because Adapt places those options elsewhere in the editing interface. One thing I thought was really interesting is that you can control the exact look and feel of each element, but wish a CSS area (similar to the WordPress custom CSS area, but instead you can customize and associate CSS with individual ABC elements), but there’s also “background image” and “background style” settings in the editor near the bottom.

With all of that in mind, I stopped trying to port an existing course and just wanted to play. So I present to you, The Catsum Course – Because the Internet Needs More Cats. I grabbed a bunch of extensions from Github and plugged them into Adapt just like uploading plug-ins to WordPress. Then I opened the Catsum Ipsum generator in another tab, and Unsplash in one more and just tried to have some fun. So by the end of playing around I had one page that looked like this:

This is what the layout overall looks like after dropping in new blocks and components. I went to preview the course and because I dropped in a bunch of extensions, including xAPI I got the following:

Add learning record stores to my to-do list of learning new tech. After setting up a couple of pages I was able to hit publish, which exports a .zip file of all of the course files and assets. Similar to when you hit “export for web” in RISE 360. So from there, I spun up a new subdomain over at Module13, opened up FileZilla and after refreshing my memory with Lauren’s awesome FTP guide, batch uploaded all of the files. Voila, working live demo of an Adapt course.

Overall this I found to be a more fruitful exercise than trying to shoehorn an existing course into a new tool. That’s not saying there’s something wrong with existing course material, but it really showed how constructing course materials is shaped by the tools they’re made in. Many of the courses I currently work on begin their life in MS Word. It’s familiar and has a strong history both in distance ed and with LMSs. I learned that the framing of things needed a big change when I introduced RISE360 with an instructor to a set of new courses. Adapt is no different. To use this you really have to step three steps back and think change the way you think about course materials.

That’s what I have for now, enjoy the Catsum Course.